Armin Völckers has devoted himself entirely to painting. His human figures always appear integrated in curious pictorial spaces and fragile idylls. Völckers illustrative paintings are characterized by an enigmatic visual language. He dissolves spatial boundaries with his narrative fantasy. Although he has a distinct and typical painterly signature, he often incorporates elements of classical painting styles. This correlates with pictorial objects taken equally from everyday life, dreams, and pop culture. In his paintings, reality and the dream world are seamlessly intertwined. Humans always appear in them, often depicted in dissolving motion, sometimes only through traces or splashes of color they leave behind in his sceneries. In the painting “Rousseau”, only the easel with canvas in a deserted landscape refers to the human being – in this case the absent artist – who is additionally indicated by a central red dot. Armin Völckers was born in 1963, grew up in Rio de Janeiro and studied at the Berlin University of the Arts with Dietmar Lemcke, Jens Jensen and Henning Kürschner. 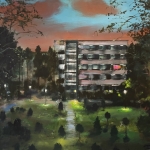 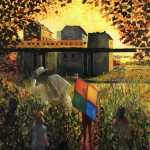 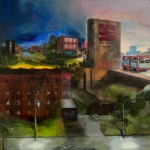